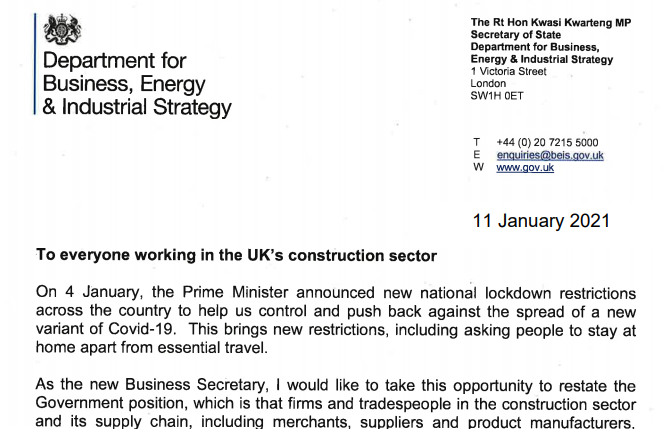 The newly appointed Secretary of State for Business, Energy and Industrial Strategy, Kwasi Kwarteng, has written an open letter to the construction sector regarding its work through the new national lockdown.

In the letter, he reconfirms that firms and tradespeople in the construction sector and its supply chain should continue to operate.

“It is vital that construction continues through these unsettling times and I want to reassure you that the Government values the crucial contribution your sector is making”, he writes.

In other political news, it has also been announced that a new Construction Minister has been appointed to replace Kwasi Kwarteng who held the role for just a month.

Anne-Marie Trevelyan, MP for Berwick-on-Tweed since 2015, is now Minister for Business, Energy and Clean Growth. As well as construction, her portfolio includes responsibility for the Government’s ’10 point plan’ to tackle climate change and create hundreds of thousands of green jobs.

Anne-Marie Trevelyan previously served as secretary of state for international development and on the public accounts committee. Prior to joining parliament, she worked as a chartered accountant.

Read the Secretary of State’s letter in full here.